Pipe threads are screwed connections which are particularly used in gas and water installations. In Europe, British Whitworth pipe threads (BSP and BSPT) are the most common. While in the USA the American NPT and NPTF are more common. Both British and American pipe threads are inch threads. This means that the pitch is given in threads per inch. 1 inch corresponds to 25.4 mm. However, for pipe threads, the inch specifications do not correspond to the inch diameter (e.g.: BSP 1″ = approx. 33.25 mm). This confusing peculiarity has historical reasons. In the past, the inner diameter was the leading factor for measuring pipe threads and this was 25.4 mm. The outer diameter, however, was approx. 33 mm at that time. But due to improvements in steel production and manufacturing it had become possible to produce thinner pipe walls. In order to avoid having to completely replace existing installations that were produced according to the outside diameter, it was decided to increase the inside diameter. 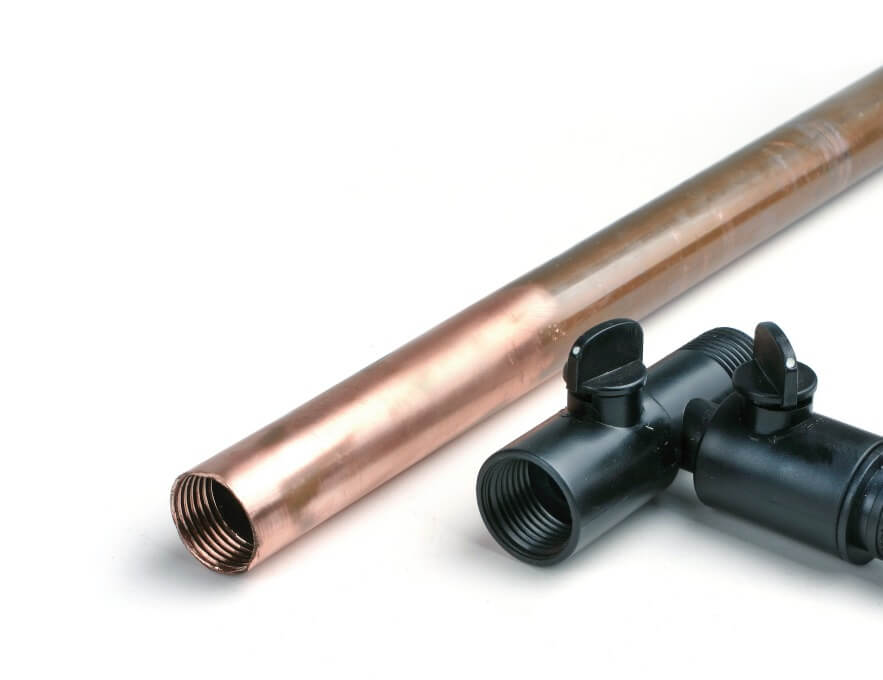 Before we take a closer look at the individual American and British pipe thread types, we would first like to clarify essential differences and important terms for better understanding.

The pipe threads differ in their shapes. On the one hand there is the cylindrical or parallel thread form and on the other hand there is the tapered or conical thread. In the course of the text we will work out the meaning of the differences further.

In addition, there are pipe thread connections which are self-sealing, i.e. which function without sealant. And pipe threads that are not self-sealing. These require sealants, such as hemp or Teflon tape, to ensure tightness. We will also go into this in more detail later on, with the individual types of thread.

The thread type National Taper Pipe (NPT) is a tapered or conical pipe thread which is used for pipe fittings. The internal and external threads of the NPT are conical. The NPT thread is self-sealing only at low pressure and when it is not exposed to strong temperature fluctuations. Therefore it is recommended to use additional sealant. It is defined in ANSI B 1.20.1.

The National Taper Pipe Dryseal (NPTF) is also a tapered or conical pipe thread (internal and external thread), which, unlike the NPT, is self-sealing even under high pressure and changing temperatures. It is defined in ANSI B 1.20.3.

The main difference between NPT threads and NPTF threads is that the thread profiles are different. In the case of NPTF threads, internal and external threads overlap and can therefore act without sealant.

The British Whitworth pipe thread is specified in inches and has a flank angle of 55 degrees. At this point we will concentrate on the two thread types BSP and BSP.

The British Standard Pipe is a Whitworth pipe thread and is marked with the abbreviation G. It is a non self-sealing thread. Both the internal and external threads have a cylindrical or parallel thread form. It is only sealed by the interposition of a sealant. It is standardised according to ISO 228.

Whereas the British Standard Pipe Taper has a tapered external thread and a cylindrical internal thread. It is often abbreviated as R (tapered male thread) and Rp (cylindrical female thread). Due to this thread connection it is self-sealing. It is standardised according to ISO 7-1.

Combinations of G- and R-threads are possible. However, only in the connection combination:
Tapered R male thread and cylindrical G female thread.

Since not all pipe threads are the same, this article contains a comparison table of the pipe thread types NPT and BSP. These are also sometimes confused!

To the article: Pipe thread is not equal to pipe thread!

These were the 4 most known pipe threads. Do you have questions about threads? Call us or write us. We will gladly help you.