The 13 most important thread types you should know

What exactly is a thread?

A thread is, simply explained, a profiled notch that runs in a wave-like and continuous manner around a cylindrical bolt. 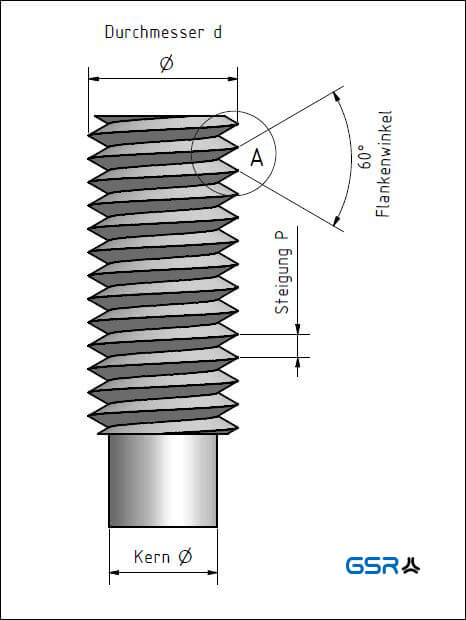 As already described in our articles from the section History of Threads, threads are thousands of years old. Threads accompany us in our everyday life. Not always visible. We are not really aware of the benefits they have for us. But they are used everywhere. For example, in our motor vehicles, right up to when we put on our reading glasses. The connectors make our lives easier and literally hold everything together.

As versatile as they are in use, there are very special requirements and loads on the threaded parts. A fundamental distinction is made between:

Fastening thread is probably the type of thread that most of you think of first. They are tight threads, as we find in nuts and bolts.

Movement threads, on the other hand, are thread types that convert rotary motion into linear motion.

Nowadays, we find transport threads in agricultural machines and in water conveyance in the form of screws.

Usually clockwise threads (right-hand threads) are threads that can be fastened by turning them clockwise. Less common are left-handed threads (left-handed threads), which can be screwed together counterclockwise. This connection is always used if it is to be avoided that the thread could loosen due to the self-movement. As for example with the left-hand bicycle pedal. The left-hand thread can be recognized by the abbreviation LH, while the right-hand thread has the abbreviation RH.

Why the different thread types?

The different types of threads result from historical developments and cultural preferences. In addition, there are different thread standards due to special requirements on the load-bearing capacity. The thread form is a decisive factor here.

What are the 13 most important thread types?

For the metric ISO thread types, the dimensions are always given in millimetres. The pitch is calculated by measuring the distance between the first and second tooth.

The ISO metric thread is a worldwide standardized thread and is probably the best known and most used in Europe. It is also known as a standard thread. Pitch and diameter are measured in millimetres. The code letter for the metric thread is M. The flank angle is 60 degrees. Furthermore, this type of thread is precisely defined in DIN 13 and DIN 14. DIN is the German Institute for Standardization.

The ISO Metric Fine Thread is similar to the bigger brother of the ISO Metric Thread. Here the code letters are MF and the flank angle is 60 degrees. However, both differ in the pitch.  The metric fine thread is used for example for watches.

For the American thread types, the dimensions are always given in inches (1 inch = 25.4 mm). The flank angle is always 60 degrees. The main difference between the various American unified threads is the pitch of the threads. These are also indicated in threads per inch. To determine the pitch, the number of threads is counted in one inch.

The Unified screw thread is a standard thread, which is mainly used in the USA and is the American equivalent of the Metric ISO thread. Only the unit of measurement inch instead of centimeter is used. The flank angle is – as with the ISO thread – 60 degrees.

The same applies to the Unified National Fine thread type, which is the American fine thread to the ISO metric fine thread. As with the UNC, the flank angle is 60 degrees.

The thread type UNS is a special thread, which differs from the other Unified-threads in the pitch. Here, too, the flank angle is 60 degrees. This thread type is used for microphone stands, among other things.

The thread type National Taper Pipe (NPT) is a tapered or conical pipe thread which is used for pipe fittings. The flank angle here is 60 degrees. Unlike NPTF, it is only self-sealing at low pressure.

The NPTF is a tapered or conical pipe thread, which is self-sealing and has a flank angle of 60 degrees. The main difference to the NPT thread is that the internal and external threads overlap and can therefore be self-sealing without the use of sealant.

The British Standard Whitworth is on the one hand a standard thread and on the other hand a screw thread. It is often abbreviated with the abbreviation W or WW. In terms of meaning and use, it is equivalent to the ISO metric thread. It is specified in inches and has a flank angle of 55 degrees.

The British Standard Fine is the English variant of the fine thread. The meaning and use corresponds to that of metric fine thread. The thread is also specified in inches for the BSF and has a 55 degree flank angle.

The British Standard Pipe is a Whitworth pipe thread. It is a cylindrical thread and therefore not self-sealing. It is abbreviated with the abbreviation G. A small special feature is that the inch specification does not correspond to the inch diameter. For example: BSP 1″ = approx. 33.25 mm.

Whereas the British Standard Pipe Taper has a tapered external thread and a cylindrical internal thread. It is often abbreviated as R (tapered male thread) and Rp (cylindrical female thread). It is self-sealing in itself.

These were the 13 most important types of threads that you should know about. Do you have any questions or suggestions? Is a thread type important to you missing? Please do not hesitate to contact us or leave us a comment.