The origin of the dart cannot be precisely timed. Although the name is of French origin, one assumes the origin in England. The game of darts as we know it today looks back on a long history. The sport of darts originated at the end of the 19th century and was initially known as a kind of pub game. Within the last few decades it has become a great skill sport and tournament game. Nowadays fans fill large halls to watch live Professional Dart Corparation (PDC) games. The atmosphere at the tournaments is well-known and popular with the spectators. The sport is also broadcast live on television. One of the most famous players is Phil Taylor, who made the sport popular with an even larger audience. In the meantime, professional athletes have the opportunity to win very large sums of money.

To play you need a dartboard and three darts per player. The sizes of the dartboard and arrows as well as the throwing distances are regulated by the umbrella organization, the World Darts Federation (WDF) and can be read in the sport and competition rules. Over 60 nations belong to the WDF. There are several game variants, but the game variant 301/501 is preferred in tournament games.

Since we inform and write about threads in our blog, we want to take a closer look at dart arrows and threads. A distinction is made between Soft-Darts and Steel-Darts. 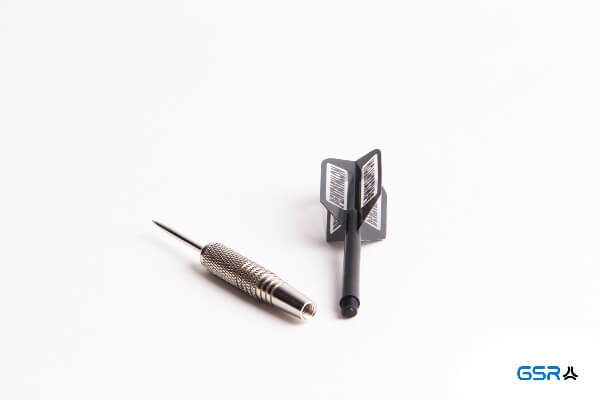 The former has a plastic or plastic tip and is preferably used in automatic darts machines. The tip is exchangeable. The latter are arrows whose tip – as the name suggests – is made of steel or metal. As you can see in our photo, the tip of steel darts is also the dart body. There are, however, so-called pointers, whose steel tip is interchangeable. These darts are convertible for dart machines.

Structure of the dart

Regarding the structure, a dart consists of four essential components:

As already mentioned, a distinction is made between soft tips (plastic) and steel tips (metal).

There are basically two standardized thread sizes for the soft tips:

With the Steel-Dart the tip is integrated in the barrel and has therefore only between dart body and shaft a 2 BA thread installed.

Do you have questions about threads? Call us or write us. Our competent employees will be glad to help you.

You can find taps and dies in OUR SHOP